Learning Articles › How to... › History of International Stamp Exhibitions in the U.S.

History of International Stamp Exhibitions in the U.S.

The first international stamp exhibition to be held in the U.S. took place in New York City in 1913. The Post Office Department hadn’t yet created a division to cater directly to stamp collectors, so there were no U.S. stamps issued to commemorate the event.

However, the Hamilton Bank Note Co. of New York produced a set of four Cinderella stamps to mark the occasion.

A lot had changed by the time of the second U.S. international philatelic exhibition in 1926.  The U.S. Post Office Department was more actively engaged with collectors and so they issued a special 25-stamp sheet with an inscription in the margin to commemorate the show.

U.S. #630 was therefore a dual “first” – the first stamp show commemorative as well as the first U.S. souvenir sheet.

While many collectors are familiar with the White Plains issue, few are aware of the beautifully engraved Cinderellas that were also produced in conjunction with the exhibit. 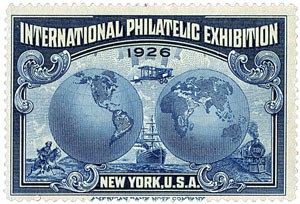 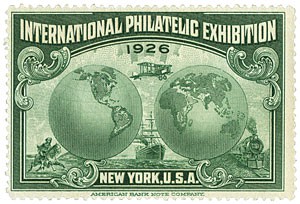 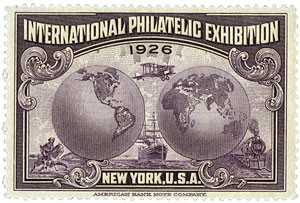 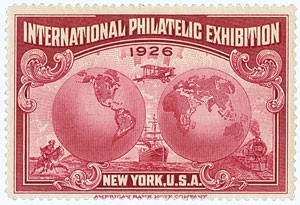 Printed by the American Bank Note Co. – which also produced a great deal of U.S. currency and postage stamps – these Cinderellas are quite appealing. Both sides of the globe are pictured, along with four modes of transporting the mail – Pony Express, merchant steamship, railroad, and airplane. It’s pretty neat to realize airmail was still relatively new in 1926 and the image of a plane represented the “modern” method of delivery.

Mekeel’s Weekly Stamp News described the 1926 International Exhibition as having been a “success beyond belief” that exceeded “the highest expectations in every respect.”  Its editors predicted it had established “philately in the front rank of recreational studies.”

From the White House, President Calvin Coolidge turned a golden key that was connected to the Grand Central Palace, formally opening the exhibition. Thousands of collectors lined up to view 800 frames, which each held 30 pages.

The total value of the stamps exhibited was estimated at over $10,000,000 and included the famous British Guiana stamp that was then owned by Arthur Hinds. (That’s equal to $451,000,000 in today’s wages!) It was the first time the legendary stamp was displayed in the United States.

In addition to the exhibits, there were 50 dealer booths plus official exhibits by the U.S. government plus those of Canada, Sweden and Austria.

The International Stamp Exhibition has been held in the U.S. once per decade ever since 1913. Since 1926, a commemorative stamp has also been issued to coincide with the event. New York City will host the next show, which will be held in 2016.

Organizers expect over 250,000 people to pass through the doors. About 200 dealers will have booths, dozens of postal administrations will be represented, 3,800 frames of competitive exhibits are planned plus a Court of Honor with priceless stamp rarities, auctions, seminars, First Day ceremonies and much more.

NY2016 will be held from May 28rd to June 4th, 2016 at the Javits Center in New York City – and admission is free.  It’s an event you won’t want to miss.  You’ll find more information at the official website here.

So while you wait for May to roll around, enjoy these images of International Stamp Exhibition commemorative stamps!