If you think the Jenny Inverts are the rarest Airmail stamps in the world, you’re wrong. 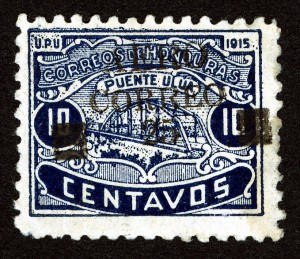 Years ago, the 1925 Black Honduras held the record for the highest price ever paid for a single stamp in a public sale in America. The four stamps then slid into obscurity… and copies began to disappear. Only one Black Honduras is known today – making it 100 times rarer than the Jenny Inverts!

Like it’s more famous American cousin, the Black Honduras represents the earliest days of airmail flight. And like the Jenny Inverts, the stamps were shrouded in mystery and surrounded by intrigue. Here’s the little-known tale of the unique 1925 Black Honduras…

Airmail was in its infancy in the early 1920s. The U.S. had begun delivering airmail in 1918 (when the Jenny Invert was created.) Dr. Thomas C. Pounds, a native of Montana, was living in Honduras.

Pounds lived in Tegucigalpa, which was the only capital city in the Americas without a railroad connection. Honduras’ main seaport, Puerto Cortes, was 150 miles away – a trip over mountains that took three to seven days by mule, depending on the weather. A plane could fly between the cities in two hours.

In 1922, Pounds contracted with the Honduran government to fly mail between the two cities. Each piece of mail would require two stamps – a Honduras stamp (the government would keep these proceeds) and one issued by Pounds, who would keep this revenue to cover his costs.

Pounds named his company Central American Airlines. But before he could get it off the ground, a revolution forced the U.S. to limit the shipment of planes to Honduras. Once politics stabilized, Pounds arranged for financial backing from Juan Trippe, a commuter flight operator who later founded Pan-American Airlines. In February, 1925, Trippe sent Pounds a plane and a pilot, Sumner B. Morgan of upstate New York.

Morgan flew to Tegucigalpa in a seaplane outfitted with special landing gear. Pounds greeted Morgan at the dock, where local resident Julio Ustariz meandered over to see what the excitement was about. Ustariz – who was one of the fastest gun-handlers in Central America – offered the men the use of his nearby airport. The men accepted, and lived at Ustariz’ hacienda while they made final plans for their airmail service.

The official inaugural airmail flight was scheduled for May 1, 1925. At the last moment, the Honduran government told Pounds the special stamps he was promised for his use hadn’t been produced. Instead, they gave him a small number of obsolete 1915 Honduras stamps and authorized him to apply overprints.

Pounds and his associate, a jack-of-all-trades named Karl Snow, used a very small hand-operated printing press to prepare provisional airmail stamps using the old Honduras stamps. They worked in two sessions – one using red and black ink near the end of April and a second printing in blue ink a little while later. Pounds made the stamps available at post offices and private locations, which was common in Honduras.

Central American Airlines was a failure and ended after just seven months service. This rare stamp is the evidence of its existence. But it’s story isn’t over yet…

In 1927, John Luff, editor of Scott Catalogue, was excited to receive four unknown stamps in his mail. This was two years after the famous Black Honduras was issued, but collectors were unaware this stamp existed.

Luff knew the surcharge matched those seen on genuine stamps. But he thought the stamp could be from a trial printing, which would make it less valuable than a real stamp. Luff wrote to Ustariz and implied the stamp was counterfeit. Karl Snow, who helped print the stamps, also told Ustariz he didn’t recall printing the 25¢ surcharge on the stamps.

Days later, Luff received a letter from Raul Duron Membreno, who worked as an agent for Scott Co. The envelope contained 16 1925 Honduran airmail stamps, including a pair surcharged exactly like Ustariz’s. Membreno, who was once an official in the Honduran post office, thought the stamps were genuine. Luff didn’t say he thought they were genuine, but didn’t return them to their proper owners.

Three years later, a stamp dealer named H.A. Robinette announced the find of a new 25¢ on 10¢ Honduran stamp by mailing it to Luff. The original owner claimed to have bought it from a post office. Unlike the previous issues, it was the first example that can’t be tied to Dr. Thomas Pounds, indicating it was actually an issued stamp rather than a proof.

In 1933, Raul Duron Membreno’s stamp collection containing the pair of surcharged Honduras Airmails was stolen. The stamps were never recovered, leaving only two examples of the #C12.

Apparently, Luff sold the Ustariz example to Bruechig, a stamp dealer and author. At one point it appears to have been on cover but it was removed, cleaned and regummed. The last time the stamp was seen publicly was 2002, when it sold at auction. The #C12 was reportedly lost and has never been recovered. However, some collectors have theorized the owner – who may have owned the only two remaining – of destroying one to increase the catalogue value of the other.

Dr. Philip Cole purchased Robinette’s copy and showed it in his grand award exhibit at the 1936 TIPEX show. The #C12 was now referred to as the “World’s Rarest Airmail Stamp” by Stamps magazine. The Robinette example made history twice – first by selling for $11,500 in 1957 and again in 1961, when it sold for $24,500. It was the highest auction price ever paid for a single stamp in America at the time. The Robinette copy – the only surviving Black Honduras stamp – is the stamp now owned by Mystic.

Watch as Don tells the story in this exclusive video – click here.