Mystery of the Grinnell Missionaries

The story of the Grinnell Hawaiian Missionaries reads like a mystery, but it’s a true story, full of real-life drama.  For nearly 100 years, their genuineness has been debated.  Are they really scarce Hawaiian Missionary stamps… or some of the greatest forgeries ever created?

The saga of the Grinnell Missionary stamps is a long and dramatic one.  From the pages of an old prayer book locked away in a battered trunk to a courtroom filled with witnesses for the prosecution and a judge’s verdict of “forgeries” to a high-tech laboratory in the UK, the Grinnells have journeyed a very long way.  And many believe they had already survived an even longer journey – one that began over 150 years ago in the Kingdom of Hawaii.

Now you can explore the Grinnell Missionary stamps in Mystic’s series of booklets.  Then watch David Beech, Curator of the British Library Philatelic Collections, deliver his presentation about the Grinnells during the National Postal Museum’s 2003 Maynard Sundman Lecture.

In The Grinnell Missionaries, you’ll discover the history of the Hawaiian Islands, the role the missionaries played in it, and how the kingdom’s postal service began.  Then you’ll read George Grinnell’s story of how he found the stamps and read articles from both sides of the case. 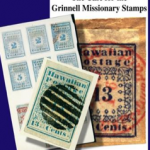 The Case for the Grinnell Missionary Stamps presents the facts gathered by the descendants of the original players, who have spent a lifetime believing in the stamps’ authenticity.  You’ll learn little-known details about the stamps, their discovery, and the research that has been ongoing for nearly a century. 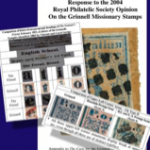 Response to the 2004 Royal Philatelic Society Opinion on the Grinnell Missionaries refutes the findings of that organization by presenting rational and logical counter-arguments.  Patrick Culhane, great-great grandson of the original owner, also wrote the response in the hopes it would foster further research on the stamps’ genuineness.

And finally, watch as David Beech of the British Library Philatelic Collections discusses the Grinnell Missionaries. Will all of this evidence help you solve one of philately’s greatest mysteries?  Probably not, but you’ll sure enjoy trying!