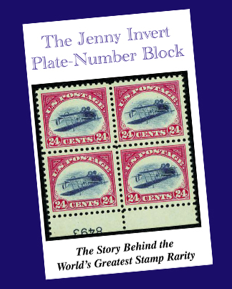 The Jenny Invert Plate-Number Block is America’s greatest stamp rarity.  It has always been the most sought-after and valuable of the six inverted Jenny blocks.  It’s the only Plate-Number Block from the legendary 1918 24¢ Airmail stamp error sheet, which makes it unique.

The Jenny Invert Plate-Number Block was auctioned in 2005 for $2.97 million, setting a record for a U.S. philatelic item.  Less than two weeks later, it was in the news again – traded to Mystic President Don Sundman for the unique 1868 1¢ Z Grill.  Now you can learn the story of the Jenny Invert PNB and the historic one-for-one stamp trade in our free booklet.  Just click here.